It All Started With Lasagna

The Life Story of Peter Mercanti and His Ingredients for Business Success, Leadership and Happiness
by Peter Tassi 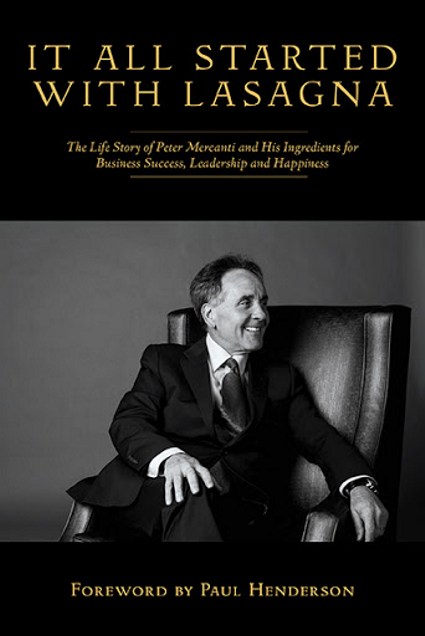 It All Started with Lasagna is a chance to get up close and personal with Peter Mercanti, a successful Hamilton businessman who came to Canada as an immigrant at age seven with his parents. With forthright honesty, Peter shares the story of his rise to business success—starting off at the age of eleven with selling 'recycled' car engines to the scrap yard from which they were liberated—and the development of Carmen's Banquet Centre, his flourishing wedding and event venue, and associated hospitality businesses.

In addition to his fascinating personal story, Peter shares his secrets to success both in business and in life, as well as key tips for becoming an effective leader. He also shares many fascinating and humorous stories about the various celebrities who performed at his venue, including Michael Douglas, Al Pacino, Sylvester Stallone, President Bill Clinton, Dom DeLuise, Sophia Loren, Wayne Gretzky and many, many others.

Both inspirational and engaging, this book is for: any entrepreneur—young or old (Peter recently started his latest business, Mama Yolanda's Lasagna, at age 70); anyone looking for inspiration on how to live better spiritually, personally, or professionally; those with an interest in Hamilton's recent history; and anyone who just wants to be outright entertained with funny stories.

All net proceeds from the sale of this book will be donated to the Charity of Hope.

"If you have the good fortune of knowing the man, you're lucky. Peter Mercanti is a special individual. His smile is infectious and his focus on whatever you need is what truly sets him apart as a dedicated friend, and a driven business colleague. If you don't know the man, you're still lucky because you have this book. Read it from cover to cover and place it on a prominent position on your bookshelf. You will still get the bene t of becoming a virtual member of Peter's family.“

McMaster University
www.NickBontis.com "At a young age I had the pleasure of working with Peter. It is wonderful that Peter speaks of my father Pat as his mentor. My father once said to me, ”Peter is the only guy I know who could take my place in the future.“ Peter is a great businessman and I am honoured that, through this book, he now passes on those key learning lessons from my dad along with his own brilliant business knowledge."

Paletta International, Princess Gates Entertainment "Meeting Peter is like gaining a Masters of Business degree without the paperwork. What a life and what a legacy for all of us to learn from. His biography will have you laughing and feeling like part of la famiglia"

Educator and Project Manager "The course of my life changed when I met Peter Mercanti. Not only is he a great mentor, but he is also a great friend whose heart is immeasurable. A true leader."

www.mamayolandas.ca "Peter's killer instinct in business is what made him a success. But it's his heart that makes him a class act. From the moment you meet this endearing individual, you instantly feel like you've become a part of the family."

Canadian former professional ice hockey player "This book truly captures the originality, personality, and fearlessness of my father. It is equally inspiring and humorous, and shares valuable advice on what it takes to succeed in business and in life. A truly remarkable ”Made in Hamilton“ immigrant story.

CEO, CARMEN'S GROUP "A father with so many interesting layers and colourful depths becomes a father of many teachings. This biography will give you a glimpse into a few of them that I was fortunate enough to learn from."

COO, CARMEN'S GROUP "Every daughter wishes to have a father who teaches them to be strong, how important family is, about God and to have business savvy. My father taught me all of that and this book gives you a glimpse into just that."

MULAS CUSTOM HOMES
Peter Tassi is a professional author who has published several nonfiction books, including Hamilton Heroes: Tales of Adventure, Adversity and Heroism from World War II and several spiritual and inspirational titles. As well, Tassi has written several musicals, plays, documentaries, and movie scripts that have been produced. He has also worked as a high-school theology teacher, school administrator, and chaplain and spent many summers working on missions in developing countries.

Tassi lives in Hamilton, Ontario, so he understands firsthand the impact Peter Mercanti has had on his hometown.